Researchers representing UW-CTRI and the Center Cessation Initiative (C3I) presented findings at the Annual Conference of the Society for Research on Nicotine and Tobacco (SRNT) in Baltimore April 14-18. Here is a summary:

UW-CTRI Co-Research Director and SRNT President Dr. Megan Piper presented the SRNT presidential address at the presidential symposium. In her state of SRNT address, she announced the founding of the SRNT Racial Equity Committee, which will report to the SRNT Board of Directors and participate in ongoing projects. There is now a health equity track at SRNT. She noted many members have benefited from SRNT University online and noted that SRNT no longer permits tobacco employees to attend the annual conference. Finally, she noted that SRNT will proceed in San Antonio, despite concerns noted by members, due to contractual obligations as well as the financial penalties if SRNT were to withdraw. The organization will work to support nonprofit groups in Texas that work toward social justice. Piper also introduced Dr. Mignonne Guy, Associate Professor and Chair, Department of African American Studies, Virginia Commonwealth University and bestowed the presidential award on Dr. Pebbles Fagan, Professor, Director, Center for the Study of Tobacco, Department of Health Behavior and Health Education, University of Arkansas for Medical Sciences.

UW-CTRI Researcher Dr. Adrienne Johnson presented her poster on findings from a qualitative analysis of 24 people aged 50-75 who smoke. Participants reported seeing quit-smoking ad campaigns, but most were not affected by them. Some thought about quitting but didn’t follow through, while others felt bad about themselves following ad exposure. However, through the interview, they did feel motivated by learning that their smoking raised their risks for dementia, especially since it could impact their ability to remain living independently. In Johnson’s ongoing research, she plans to test motivational messages of fear vs. hope related to dementia risk and smoking. Those interviewed were aware of medications to help them quit, and despite some previous difficult experiences, were willing to try different cessation medications in future quit attempts. Many were unaware of quit-smoking counseling options and did not know where to access it, but many were willing to use it.

UW-CTRI Researcher Dr. Marlon Mundt presented his poster, “Cost-Effectiveness of a Chronic Care Smoking Treatment Program in Primary Care.” At six primary care clinics, he found that cessation treatment rates increased from 12.9% of individuals on the smoking registry pre-implementation to 24.0% post-implementation. Quit rates increased from 2.1% pre-intervention to 10.5% post-intervention. Total post-implementation costs were $4.31 per patient per month for individuals on the smoking registry. The incremental cost-effectiveness ratio (ICER) was $27.92 per person contacted, $86.19 per person treated, and $127.43 per additional person who quit smoking. Acute healthcare costs decreased from pre- to post-implementation by an average $42.65 per patient per month, Mundt said. 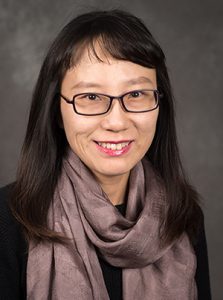 Dr. Nayoung Kim was the lead author on a virtual presentation in partnership with several UW-CTRI researchers. In her presentation, “Time-Varying Mediators of Pre- and Post-Quit Nicotine Patch Therapy in Adults Attempting to Quit Smoking with Varenicline,” Kim shared that adding nicotine patches to varenicline in the peri-cessation period appears to enhance positive emotions and quitting confidence—though the effect on positive emotions may only last four to eight days into a quit attempt.

UW-CTRI Communications Director Chris Hollenback presented a poster on the use of Instagram to reach teens to encourage them to quit nicotine products. NCI requested and funded the campaign, offering money to states to assist with promotion of the website teen.smokefree.gov and the SmokeFreeTXT program. UW-CTRI staff set out to discern how best to reach teens. More teens say they use social media daily (63%) than watch TV (56%), often without commercials, (Common Sense Survey, 2019 data). After YouTube, Instagram is the platform most used by American teenagers (72%), according to the Pew Institute (2018). Teens are 2.5 times more likely to click through Instagram ads than on other social platforms (Fortune survey). Therefore, on behalf of NCI and the Wisconsin Tobacco Control and Prevention Program, UW-CTRI placed ads on Instagram. Within a week, 1,800 teens clicked on the ads and visited teen.smokefree.gov. The cost per click was $6 so, while not inexpensive, the campaign appeared to be a reasonably efficient way to reach teens—who otherwise can be difficult to reach, to get them to engage with an intervention.

UW-CTRI Director Dr. Michael Fiore presented on the Cancer Center Cessation Initiative (C3I) Coordinating Center. Fiore noted that, at baseline five years ago, a survey found that only a quarter of cancer centers felt treating patients for tobacco use was a priority. “We had smoking causing cancer, smoking causing worse cancer outcomes, and low rates of treatment at coordinated comprehensive cancer centers,” Fiore said. Fiore and colleagues noted in the New England Journal of Medicine the importance of leveraging the variability of EHR and processes among cancer centers. Closed-loop eReferral and tobacco treatment specialists both helped participating cancer centers reach and treat more patients to help them quit tobacco use. After five years, C3I centers have treated nearly 100,000 cancer patients to help them quit tobacco use.