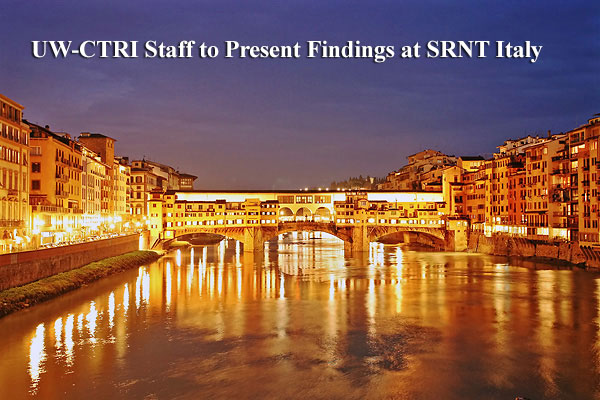 Five UW-CTRI staff members in March will present research findings at the 2017 Society for Research on Nicotine and Tobacco (SRNT) Annual Meeting in Florence, Italy.UW-CTRI Associate Research Director Dr. Megan Piper will be the discussant for a symposium about a technique to analyze data gathered from mobile devices to see how use of tobacco products varies over time. This technique, known as “time-varying effect modeling” (TVEM), holds potential to help us better understand how smokers—and former smokers—change over time and how best to support them. Panelists will present their TVEM research findings on addiction behavior and predictors and Piper will summarize the findings at the end of the symposium. The Chair is Stephanie Lanza (Penn State), and presenters include Jessica Braymiller (Penn State), Michael Russell (Penn State), and Lisa Dierker (Wesleyan University).

Four UW-CTRI employees will present posters at the conference, including: