UW-CTRI staff presented four speeches and seven posters at the 2016 annual conference of the Society for Research on Nicotine and Tobacco (SRNT) at the Sheraton Grand Hotel in downtown Chicago.

The closest thing to a “rock star” atmosphere was at the SRNT awards ceremony, when UW-CTRI Research Director Dr. Tim Baker received the 2016 Ove Ferno Award for career excellence and gave the clinic theme lecture. See below for full coverage of Baker’s award.

Here is a rundown of other UW-CTRI presentations. 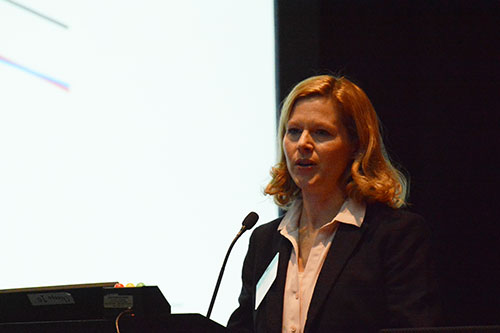 UW-CTRI Researcher Dr. Jessica Cook delivered her presentation, “Smoking and Psychopathology: Mechanisms and Treatments.” For both those with PTSD and those in the control group, smoking a cigarette with or without nicotine reduced the negative emotional response to the stressor. Also, consistent findings across diagnostic groups suggest that smoking motivational processes, at least with regard to emotional modulation, may be similar for smokers with and without certain mental illnesses.

UW-CTRI Researcher Dr. Stevens Smith gave a presentation, “The Effects of the Nicotine Patch, Varenicline, and Combination NRT on Long-Term Abstinence: A Comparative Efficacy Trial.” He also delivered a poster, “The Effects of Cigarette Reduction in Smokers and E-Cigarette Users Who Also Smoke Cigarettes (Dual Users).” Research showed three medications combined with coaching to quit smoking—a pill called varenicline (Chantix), the nicotine patch alone, and a combination of nicotine-replacement medications—helped about the same percentage of participants to quit smoking. 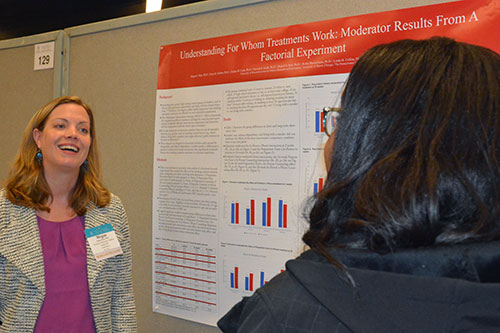 UW-CTRI Associate Director of Research Dr. Megan Piper spoke with an attendee about her poster, “Understanding for Whom Treatments Work: Moderator Results from a Factorial Experiment.” Self-reported history of a psychiatric disorder and being a woman predicted lower long-term abstinence rates. Participants with a psychiatric history did not respond well to intensive in-person counseling, which was unexpected. It may be that smokers with a psychiatric history would benefit from extended counseling (e.g., beyond 2 weeks post-quit) or from more general support rather than skill-focused counseling early in the quit attempt.

Dr. Bruce Christiansen presented a poster, “Motivating and Preparing Smokers Who Have Severe and Persistent Mental Illness to Quit Smoking.” This study demonstrated that a brief, 4-session intervention that combines motivational activities with preparation for a quit attempt resulted in a greater willingness to engage in the quit process and a greater quit rate three months later. 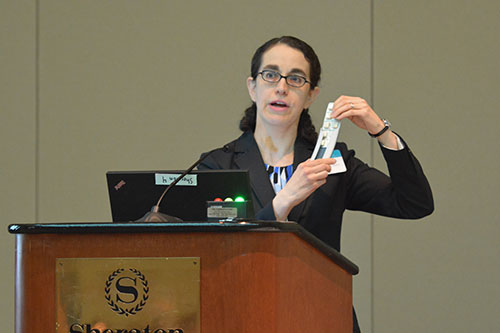 UW-CTRI Researcher Dr. Tanya Schlam presented “Identifying Intervention Components to Improve Adherence to Smoking Cessation Medication.” This research examined combination nicotine patch plus nicotine gum for 8 versus 26 weeks, as well as various strategies to encourage adherence to cessation medication, including the “Helping Hand” electronic medication monitoring device for tracking use of nicotine gum combined with feedback and counseling. Among those receiving maintenance counseling, those receiving all three adherence interventions had the highest gum use (3.8 pieces per day), while those receiving no adherence interventions had the lowest gum use (2 pieces per day). Electronic medication monitoring with feedback and counseling, and automated adherence calls increased abstinence under certain conditions. “It does seem important to increase adherence to medication,” Dr. Schlam said. She had a poster on the same topic. 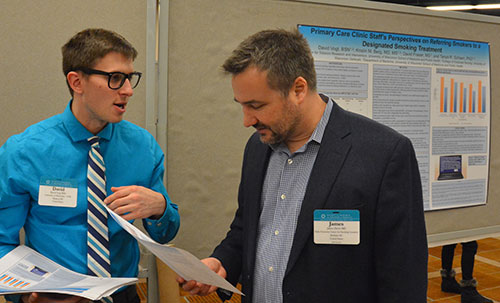 UW-CTRI Student David Vogt, RN, discussed his poster, “Primary Care Clinic Staff’s Perspectives On Referring Smokers to a Designated Smoking Treatment,” with Dr. James Davis, a former UW-CTRI researcher who now offers mindfulness training for patients who smoke at Duke University. Vogt’s research compared clinics that referred at least 80% of patients who smoke to tobacco treatment via electronic health records (EHR) to those that referred 40-77% of patients. While staff from higher-performing clinics found the EHR system easier to use to make referrals, there was no statistically significant difference in job satisfaction between the two clinic groups. Staff from higher-performing clinics reported feeling more adequately trained to make the referral and were more likely to report addressing tobacco use at every patient contact. 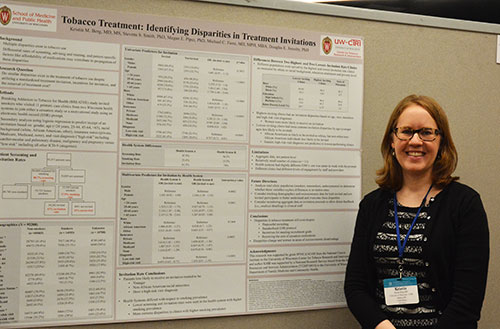