The U.S. Public Health Service Clinical Practice Guideline: Treating Tobacco Use and Dependence, is the gold standard for treating tobacco addiction. More than 5 million copies of guideline-related materials have been distributed in English, Spanish and other languages across the globe.

The original guideline, developed in 1996 by the Agency for Health Care Research and Quality (AHRQ), was updated in 2000 by a consortium that included AHRQ, NCI, NHLBI, NIDA, CDC, RWJF, American Legacy, and UW-CTRI researchers. AHRQ and UW-CTRI again led the group to publish another update in 2008.

The Guideline Editions
There have been three iterations of this guideline: 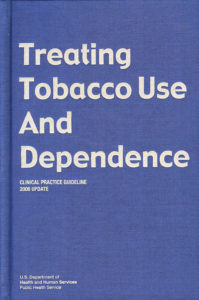