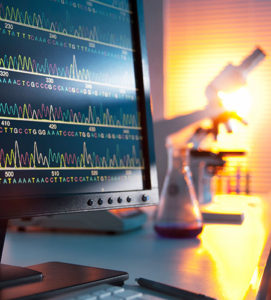 One of the most difficult parts of quitting smoking is knowing what methods will work for any given patient; choosing between types of quit-aids and counseling can sometimes feel like a shot in the dark. However, researchers have found that they might be able to find the answers in genetic code.

New findings suggest that genome-wide association studies—studies of an entire population’s DNA, looking for groups of genes that, together, influence someone’s traits—can be used to create polygenic risk scores of smoking behaviors.

Researchers take polygenic risk scores from a genome-wide association study and distill them into a single variable that can be used to predict how likely someone is to develop a certain trait.

Publishing their findings in Nicotine and Tobacco Research, the researchers found that these polygenic risk scores could be used to predict if someone would be able to quit smoking or not.

“In the beginning, genome-wide association studies were only available to geneticists, not treatment specialists,” said Dr. Doug Jorenby, a co-author of the paper and UW-CTRI researcher on one of the studies. UW-CTRI Associate Director Dr. Tim Baker was also a co-author. “The findings were scattershot and often wildly contradictory,” Jorenby said.

“However, as gene sequencing has become more available and affordable, we have been able to collaborate across disciplines and fields and take it to the next level. Now we know what we can look for and how to look for it. Polygenic risk scores take it one step further: we know there’s no one ‘smoking gene,’ but polygenic risk scores allow us to look at the combination of factors that contribute to dependence and cessation.”

The researchers looked at polygenic risk scores for four smoking behaviors: ever smoking, later age of smoking initiation, cigarettes smoked per day, and persistent smoking (or having failed quit attempts before).

They found that the later someone started smoking, the more likely they were to quit, and that, when looking at all the polygenic risk scores together, they were able to predict quit-attempt success.

“It’s sometimes said that science is just a complicated way to prove the obvious,” said Jorenby, “but this study managed to do the opposite. The polygenic risk score for later age of smoking initiation was the biggest indicator of whether or not someone would quit.

“If someone started smoking before 16 and they had a certain genetic variant, they would become heavy smokers. You know what had a lot lower correlation to smoking abstinence? Persistent smoking. Age of initiation was more important than if someone has had difficulty quitting in the past.”

While later age of initiation was the only individual polygenic risk score that could reliably predict quitting success, the study did conclude that combining the polygenic risk scores, capturing someone’s likelihood of multiple different smoking behaviors, could be a useful tool.

“We want to stop thinking about dependence as a single thing,” said Jorenby. “The future is now. We know most of what we need to know from these basic predictors, so let’s evaluate multiple pharmacotherapies, let’s do a superb job combing through all the data we have to see what might help people quit as effectively as possible.

“This study is us connecting the dots of genetic work that came before it. I hope one day it’s used to connect more dots.”