UW-CTRI researchers used an electronic device to track the use of nicotine gum by participants in the UW-Partnership to Assist and Serve Smokers (UW-PASS) Study (who also all received nicotine patches), and found that people who had a slip and smoked (lapsed) while trying to quit used less gum right before and after that first slip than a comparison group who remained completely smoke-free. The results are published in the journal Nicotine and Tobacco Research. 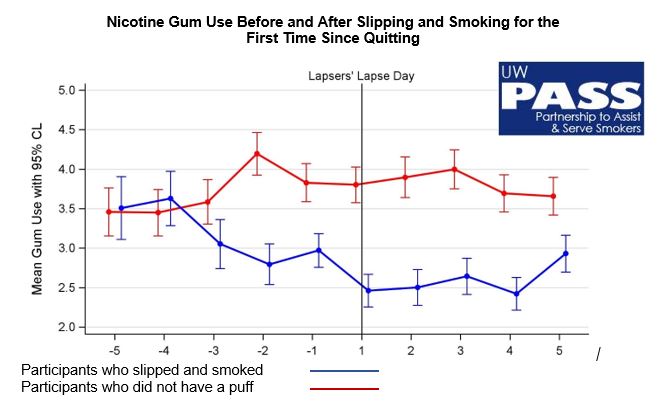 Lower mean use of nicotine gum before and after slipping and smoking predicted a more rapid escalation to relapse (defined here as smoking 7 days in a row).

“We knew that the amount of cessation medication people used was correlated with whether they ultimately succeeded in quitting,” said lead author and UW-CTRI Researcher Dr. Tanya Schlam (left). “But we didn’t know that we would find this pattern where people trying to quit smoking were cutting down on their nicotine gum use even before they ever slipped and smoked.”

Researchers found no difference in nicotine patch use among those who remained abstinent compared to those who slipped and smoked. Both groups used the patch most of the time. “Those who slipped just decreased their nicotine gum use prior to smoking for the first time after quitting,” Schlam said. “Very few studies have looked at time-stamped cessation medication use by smokers trying to quit, so that was one of the contributions of this study.”

UW-PASS used a device called the “Helping Hand,” (right) which electronically monitored nicotine gum use. Participants who slipped and smoked used less gum than participants who stayed smoke-free at multiple times: using fewer pieces of gum as early as the day after their actual quit day, tending to decrease their gum use one-to-two days prior to lapsing and, compared with their pre-lapse use, tending to decrease their gum use still further after lapsing.

Of course, while the data show that lapsing is related to prior gum use, they do not show conclusively the extent to which gum use accurately predicts or causes subsequent lapsing.

Also, a third unknown variable could be at work—such as decreased motivation, sudden stress, concerns about the medication, or pride. Some patients have commented anecdotally that they felt they shouldn’t “need” to take all their medication; they wanted to hold themselves to a high standard, or they said they underestimated how much the medication was helping them. To clarify, these factors were not assessed as part of the UW-PASS study and further research is necessary to learn why people frequently do not use their cessation medication as directed.

“It’s important for clinicians to emphasize that, while nicotine-replacement medications like the patch and gum contain nicotine, they don’t contain the more than 7,000 chemicals in cigarettes—more than 60 of which can cause cancer,” said UW-CTRI Director Dr. Michael Fiore, a co-author of the paper. “Patients should feel proud to use effective treatments as intended because it can help them to quit smoking, and that’s a tremendous boon for their health.”