A decade ago, Holy Family Memorial Health Network (HFM) of northeast Wisconsin allowed smoking on its campuses, had about 200 smoking employees and sporadically asked patients about tobacco use.

How things change. Now, HFM has completely smokefree grounds, very few employees who smoke and a staff that asks every patient about tobacco use at every visit.

It all started back in 2001, thanks to grassroots efforts by HFM employees with encouragement from Gail Terry, then the local tobacco-control coordinator for Manitowoc County. Part of their partnership included inviting Roger Dier, UW-CTRI outreach specialist, to speak to HFM staff about the importance of treating every patient at every visit and how to make it happen using the Clinical Practice Guideline: Treating Tobacco Use and Dependence recommendations. Over time, Dier spoke at nearly every site in the network. 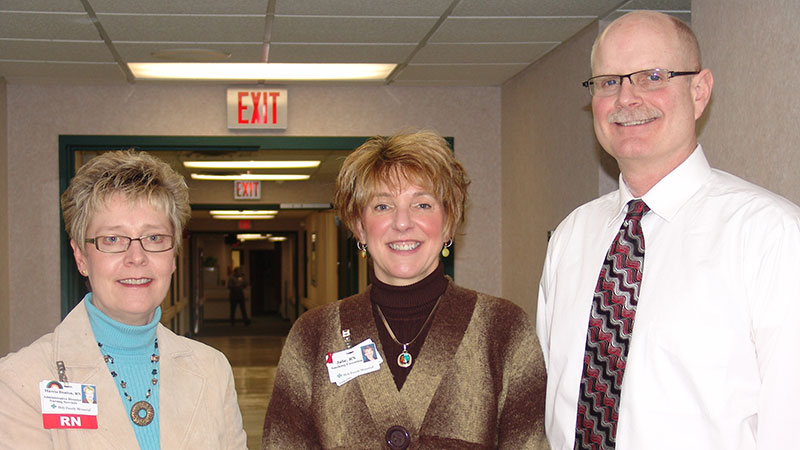 From left: Marcia Donlon, Julie A. Tittl and Roger Dier have been driving forces in ensuring Holy Family Memorial Health Network is state-of-the-science in treating tobacco use.

One of the recommendations from the Guideline is to designate a champion for tobacco treatment. Several HFM employees championed the cause. They took it a step further in 2003 by hiring a staff member for that sole purpose—Julie A. Tittl, who has built a program that mirrors the Guideline.

Tittl convinced management to add tobacco use as a vital sign for every inpatient at intake and every outpatient at every visit. Dier and Tittl incorporated Fax to Quit across the network so patients could be quickly referred to the Wisconsin Tobacco Quit Line for free assistance. And the “5 A’s” treatment model from the Guideline was posted in every patient room.

Tittl said more and more staff jumped on the bandwagon after Dier and two doctors—Dr. Richard Sargent of Helena, Mont. and Dr. Brian Harrison of Affinity Occupational Health in Appleton—addressed clinicians on the importance of treating tobacco use. “The Joint Commission’s required measures on tobacco use helped, too,” Tittl said.

In 2005, the Joint Commission recommended smokefree grounds for hospitals and health systems, a recommendation championed by Dr. Steven Driggers, HFM Chief Medical Officer and Medical Director, and Mary Maurer, Chief Administrative Officer. Thanks to their efforts, HFM went completely smokefree on all campuses and the network offered help with quitting to all employees and their families—including free coaching and medications at a reduced price for three months—and the program was so popular HFM extended it to a total of nine months. The network has about 1,300 employees and approximately 200 smoked. Before the smoking ban, only two employees tried to quit and zero succeeded. After the ban, 39 enrolled and 29 quit.

Since then, more have quit, thanks in large part to the statewide increase in the tobacco tax and the Quit Line announcing it would provide free medication.

UW-CTRI staff has delivered ongoing trainings for HFM employees, including a luncheon about motivational interviewing when Tittl ordered “cold-turkey sandwiches” to drive home the point about the need for treatments. Tittl said all new HFM physicians get tobacco training, including a pocket guide.

HFM not only refers to the Quit Line, but Tittl also offers an in-person course based on the American Lung Association’s Freedom from Smoking program. HFM has even incorporated tobacco treatment into its electronic medical records at all facilities. Once it became a required field for every patient visit, compliance shot up.

Marcia Donlon, HFM’s chief nursing officer, said some employees were reluctant to ask every patient at every single visit. “I always say, ‘If you don’t address it, patients think that if the doctor didn’t bring it up, it must not be important.’ It’s vital to ask about tobacco use every patient, every time. People change, circumstances change.” Next, HFM is considering creating standing orders for quit-tobacco medications and heightened compliance tracking. 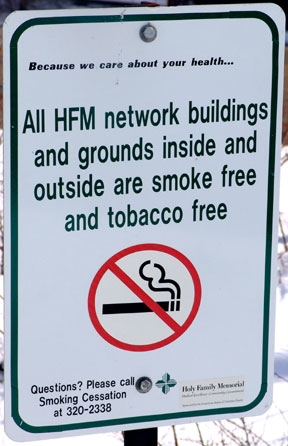