Years ago, when Brian Williams was the drummer of his high school garage band, not many who watched them perform would have guessed he’d go on to be a doctor and innovative researcher.

After all, the band was called “Jerkwater” and they played music that was “kind of heavy,” Williams said with a laugh. “There may have been screaming.”

In college, he was a snare drummer in the UW Marching Band, high-stepping next to Bucky Badger.

He mellowed with age, though, volunteering for a year in Bolivia and attending medical school at UW.

“He is a wonderful complement to the work of UW-CTRI,” said UW-CTRI Director Dr. Michael Fiore.

Williams said he enjoys helping inpatients of all ages at their times of need, but he also has a passion for prevention. Thus, a few years ago, he went to a conference sponsored by the American Academy of Pediatrics (AAP) focused on tobacco use.

“I had this ‘aha’ moment,” Williams said. “I thought, this could be my niche, bridging my work with both internal medicine and pediatrics to have a positive impact on long-term health.”

In San Diego, he founded a program that trained nurses to screen for tobacco exposure among the parents of pediatric patients. It worked, increasing screenings from 66 percent to nearly 100.

Williams returned to UW as a full-fledged clinician in July 2018 and set up a meeting with Fiore and Associate Director of Research Dr. Megan Piper about his interest in working on tobacco research and treatment.

“I feel very fortunate to be here,” Williams said. “I have an opportunity now to make what I want of it. I feel like I’m on fertile soil.”

In 2019, Williams earned an AAP grant to study pediatric smoke exposure screening. The qualitative study seeks to indentify ways to improve the screening process on the pediatric wards. Goals include identifying barriers to parents being truthful about their smoking, best practices to remove those barriers, and how to make the parents feel comfortable addressing it. He’s also partnering with UW Pharmacy to provide smoking cessation interventions for parents during a child’s admission to the hospital. The goal is for pharmacists to counsel adults who smoke and prescribe medications to help them quit.

He credits Fiore for being a tremendous mentor and for helping him to integrate the project into a complex healthcare system.

Williams is also working on a paper comparing nurses’ and respiratory therapists’ approach to smoking cessation in the pediatric hospital.

“It has been great to have Dr. Williams join the UW-CTRI family part-time,” Fiore said. “His experience as a pediatrician, hospitalist, and a new faculty member is outstanding. He is committed to helping protect children and their parents from tobacco risks.”

That includes youth vaping. He participated in the AAP legislative advocacy day and wrote the local AAP chapter’s position paper on vaping.

During his grand rounds presentation, E-Cigarettes and Vaping: A Failed Social Experiment, in October 2019, Williams showed the audience a Juul ad featuring a teenage boy vaping between two teen girls: 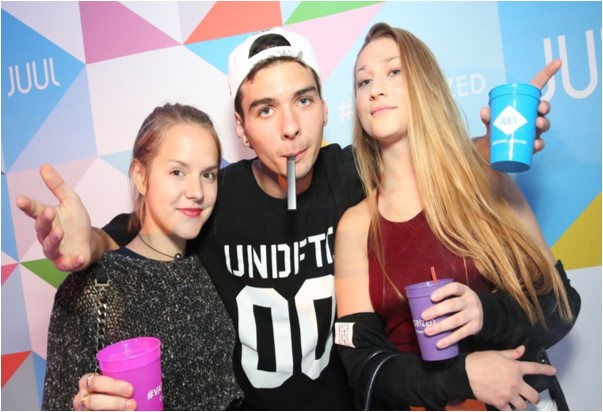 Williams plans to continue working towards youth tobacco prevention. As the father of three young daughters, it’s an issue that means a lot to him.

“That has become the biggest threat to adolescent health.”

If he succeeds, you might just spot him doing the same high-step he did years ago in the UW Marching Band. But briefly. Very briefly.