Dual use of cigarettes and e-cigarettes may not be sustainable, according to a recent UW-CTRI study, as dual users were much more likely to quit vaping than quit smoking.

However, Associate Director of Research and senior author Megan Piper said that dual use did not appear to be an effective path to cessation of combustible cigarettes. In the study, dual users smoked approximately three cigarettes less than only-combustible smokers, a meager reduction.

“Typically, you can’t have one foot in both camps. Most can’t be vaping and smoking and hope to quit smoking,” Piper said. “That sustained pattern is not going to help most people quit.” 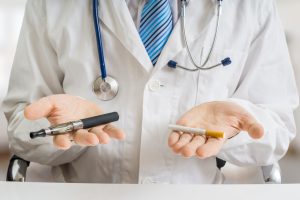 E-cigarettes did not give participants the same nicotine hit as conventional cigarettes, according to Piper. She also said that this may be one reason a majority of dual users either continued their dual-use pattern or transitioned to smoking combustible cigarettes exclusively.

Because this study recruited participants before the JUUL came on the market, the e-cigarettes used in this study—disposables, rechargeables or mods—used freebase nicotine, which delivers less nicotine to the brain than cigarettes.

On the contrary, JUUL—currently the most popular e-cigarette device on the market—uses a nicotine salt, which delivers more nicotine to the brain, faster.

Piper also said that one reason many reverted to combustible cigarettes might be because dependence is device-specific.

Another interesting finding was that certain demographic groups were more likely to continue a dual use pattern and exhibit dependence on e-cigarettes. For instance, Piper said that those who vape tend to “be white and more affluent” and also cited a predominantly white subculture of “cloud-chasing” and making technical modifications to e-cigs.

Those with psychiatric conditions are also more likely to use e-cigs, according to Piper, who called this finding fascinating.

“People might be trying (e-cigarettes) in an attempt to regulate their emotions and deal with some of their psychiatric symptoms without smoking combustible cigarettes,” she said.

Piper advises those who want to quit smoking to get professional help and use safe, effective evidence-based medication, like nicotine replacement, varenicline and bupropion.

Piper said that if one still wishes to use e-cigarettes as a cessation method, they should treat e-cigarettes as nicotine replacement treatment. This is done by setting a quit date and transitioning entirely to e-cigarettes, with the ultimate goal of quitting vaping, too.

“It’s incredibly hard to quit smoking, and you need to use all the tools you have,” Piper said. “E-cigarettes may be a tool you want to try and, while we know vaping is safer than cigarettes, we just don’t know exactly how it works or how safe it is.”

Three separate papers were published based on data from participants in the EXHALE study. The above-mentioned paper was one of them.

The study found that the three measures it tested—e-E-WISDM, e-FTND and PS-ECDI—were all correlated with markers of dependence, such as heavy and sustained use of e-cigarettes. However, the e-WISDM measure had the highest internal consistency compared to all other measures.

“Vapers may start because the flavor itself is rewarding or they want to use e-cigarettes to quit smoking,” Piper said. “That’s one thing that gets you started doing it, but repeated exposure to nicotine over time results in changes in your brain and addiction.”

The third paper, published in Nicotine and Tobacco Research as well, analyzed smokers versus dual users in terms of demographics, cigarette dependence and exposure to carcinogens and other biomarkers.

This paper found that dual users, compared to combustible-only users, were more likely to be younger, white, more educated and more likely to have a psychiatric history—particularly with depression or ADHD.

Additionally, dual users reported that they smoked fewer cigarettes per day, had higher motivation to quit smoking and also had lower nicotine dependence scores (according to the FTND). However, while dual users had lower levels of the carcinogen NNAL compared to combustible smokers, they had the same amount of carbon monoxide and cotinine biomarkers, meaning that they consumed approximately the same amount of nicotine as traditional smokers.

According to the paper, the most common reasons for using both e-cigarettes and cigarettes at the same time were:

Most dual users in the study (96%) smoked combustible cigarettes exclusively before vaping. For more information on vaping, click here.