Those with a high ability to tolerate distress may be more likely to quit smoking and remain smoke-free a year later, according to a UW-CTRI paper published in Nicotine and Tobacco Research.

Researchers looked at distress tolerance (a measure of how much an individual can withstand difficult situations and emotions) as well as anxiety sensitivity (the fear of feelings associated with anxiety) to see whether these emotional vulnerabilities were associated with quitting smoking.

“Quitting smoking can bring up uncomfortable feelings,” said lead author Tanya Schlam. “Even though medication can help make these feelings less uncomfortable, people trying to quit still may encounter times when it is hard to quit or when they really wish they could just smoke.”

Distress tolerance is an important factor to examine because if someone often uses smoking as a coping device, when they attempt to quit smoking, they are forced to either tolerate the distress or find a different way to cope.

The study found that a greater ability to tolerate distress was associated with higher quit rates and early abstinence, regardless of nicotine dependence or withdrawal symptoms that participants experienced. Anxiety sensitivity was found to be unrelated to abstinence from cigarettes.

The study assigned people who wanted to quit smoking into one of three 12-week treatment conditions: nicotine patch, nicotine patch plus nicotine lozenge, or varenicline (Chantix). UW-CTRI researchers found that among smokers with high distress tolerance, those who used the nicotine patch plus lozenge were more likely to be smoke-free one month after their quit-date than those assigned to the patch alone. 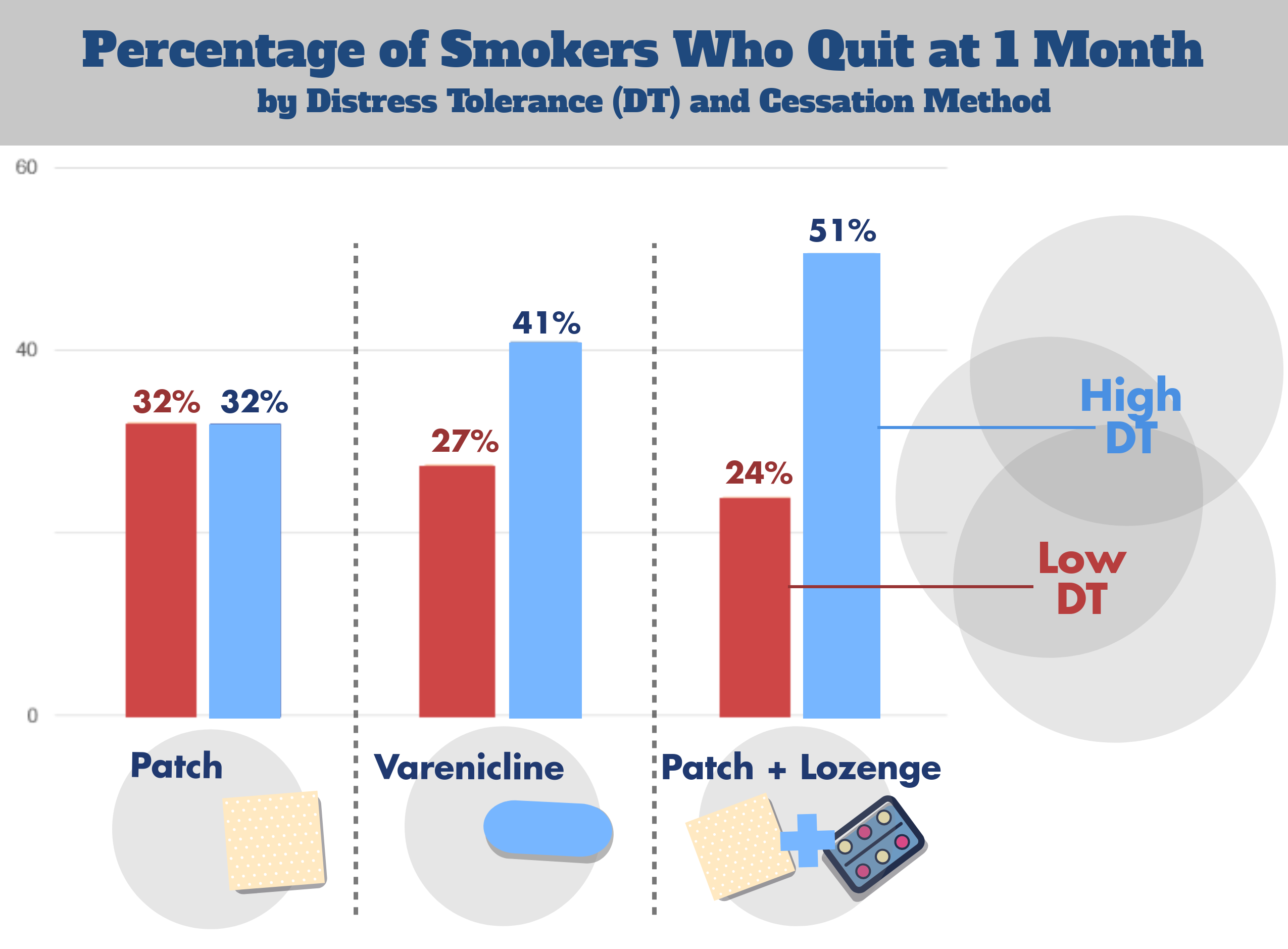 In some cases, the differences in quit-rates were striking (see figure above).

While researchers expected that smokers with low distress tolerance might benefit more from more intensive pharmacotherapy treatment, the reverse was found. This may be because those with a high ability to tolerate distress may be less impacted by the negative feelings that may cause relapse, said Schlam.

“If you’re high in distress tolerance, you tend to not feel as unhappy while you are quitting,” Schlam said. “You also may have more skills to cope with feeling unhappy.”

Schlam explained that researchers believe that because those with high distress tolerance are not as bothered by negative emotions, the combination of the patch and lozenge combats the one thing that might still interfere with their quitting—craving.

“Whereas for the people low in distress tolerance, even if you take away much of their craving with medication… while they are quitting, generally, they just don’t feel right,” Schlam said. “They don’t feel as happy as usual. And this makes it harder to quit.”

Schlam believes that a next step may be to teach people who smoke how to better cope with distress through various forms of therapy, or by creating and using just-in-time adaptive interventions, like cell phone apps which can distract the user from smoking as needed with a mindfulness exercise or a video of something important to them.

“In the moment, sometimes people can get tunnel vision and just be like, ‘I can’t do this, I gotta smoke,’” Schlam said. “If you’re feeling terrible, it can be hard to remember all the lovely little suggestions we have for how to cope and not smoke.”