For some Wisconsin patients, seeing their doctor enables them to sign up for text messages to help them quit smoking, while automatically keeping their doctor in the loop.

That’s because UW-CTRI is partnering with Epic Systems, the world’s leader in electronic health records (EHR) software, and the National Cancer Institute (NCI) to integrate SmokeFreeTXT, the NCI text-to-quit program, into the EHR.

Here’s how it works: 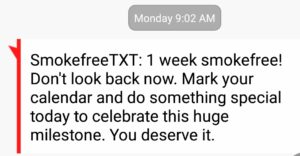 The pilot project launched a month ago, funded by the “R35” grant from the National Cancer Institute (NCI) to UW-CTRI Director Dr. Michael Fiore to support innovative research. Fiore and UW-CTRI Western Regional Outreach Specialist Kris Hayden met recently in La Crosse with Gundersen staff to check in on progress.

“We’re seeing what’s working and what can be improved,” Fiore said.

“My work was to provide that outreach support for the SmokeFreeTXT pilot project,” Hayden said. “I contacted the clinic managers to coordinate the training sessions, check-ins calls, 30-day follow-up/refresher meetings for the clinical staff and providers. I think it has been well received.”

While it’s not a study like other UW-CTRI eReferral projects, it is an effort to see if the concept of eReferral via the EHR to SmokeFreeTXT is viable. After four months in the field, UW-CTRI staff will evaluate. Gundersen will have an opportunity to expand the SmokeFreeTXT eReferral to other clinics and hospitals throughout its system.

Dr. Erik Augustson, who directs the SmokeFreeTXT program at NCI, said he is excited about the possibilities. “From early on in discussions with Dr. Fiore, it was apparent that the collaboration with him, his team, and Epic represented a truly unique and valuable opportunity for the mobile health resources my team and I develop and implement at the National Cancer Institute,” Augustson said. “Although text-based interventions have been shown to be an effective platform for delivering cessation treatments, they are underutilized. Through the collaboration with the University of Wisconsin team and Epic, the SmokefreeTXT program has been seamlessly woven into the EHR, making it is easier for physicians to refer patients to this treatment service. This, in turn, leads to greater engagement by patients who are smokers in programs like SmokefreeTXT. Basically, the needed tools can get into the hands of patients who would benefit from them.” 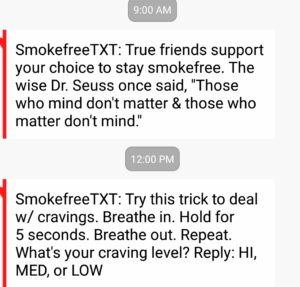 The collaborators hope this will lead to more health care systems across the nation integrating SmokeFreeTXT eReferrals into their EHR.

It won’t be easy. “No one size fits all when it comes to the EHR,” Fiore said. “Each clinic and clinician can be different. It requires adaptation.”

Augustson agreed. “There is still substantial work to be done to achieve this, but the ability to expand this approach more broadly would be a boon to the dissemination of population-level smoking cessation resources and would provide a means for physicians to more easily refer their patients to key health behavior-change treatments.”

And having a proven product to use “off the shelf” is a terrific start.