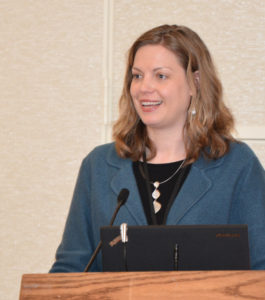 UW-CTRI colleagues joined hundreds of researchers and healthcare professionals gathered at the Marriott hotel in downtown Philadelphia for the 2015 Society for Research on Nicotine and Tobacco annual meeting. Researchers presented more than 300 pages of tobacco-related results at 23 symposia, 25 paper sessions, and four poster sessions. Here is a run-down of UW-CTRI presentations:

UW-CTRI Associate Director of Research Dr. Megan Piper (right) presented results from UW-PASS during a symposium, “Early Outcome Monitoring In Smoking Cessation Trials: Insights and Opportunities.” Piper discussed how nicotine gum plus three intensive counseling sessions prior to quitting helped smokers at primary-care clinics break their addiction to cigarettes. However, combining in-person counseling with telephone coaching didn’t add value, perhaps because both treatments are effective on their own.

UW-CTRI alumnus Dr. Danielle McCarthy of Rutgers shared results from a study that asked participants to practice quitting seven times before a quit date, and didn’t offer medications prior to quitting so they could experience withdrawal and develop coping skills for it. After the quit day, participants received coaching and medications. McCarthy found that, after ten weeks, about 43% of participants who practiced quitting were abstinent, while about 35% of those who didn’t were abstinent. Discussant Saul Shiffman pointed out that the biggest difference in quit outcomes tends to be right around the quit date (versus a week or three months later), and thus researchers should look there for behavioral effects and later after a quit date for health effects.

UW-CTRI Researcher Dr. Bruce Christiansen presented his research with the Salvation Army, “Motivating Low SES Smokers to Take Action to Quit: A Brief Intervention for the Community Agency Setting,” during a symposium organized by Raymond Boyle of ClearWay MN. Christiansen found that unmotivated smokers who participated in the intervention called the Wisconsin Tobacco Quit Line at a significantly higher rate (12.2%) than did those in either of the two control conditions (2.2% and 1.4%) and approached the rate of calling by participants who were initially motivated to quit (15.7%). Intervention participants also showed improved motivation to quit and an advanced stage-of-change status. 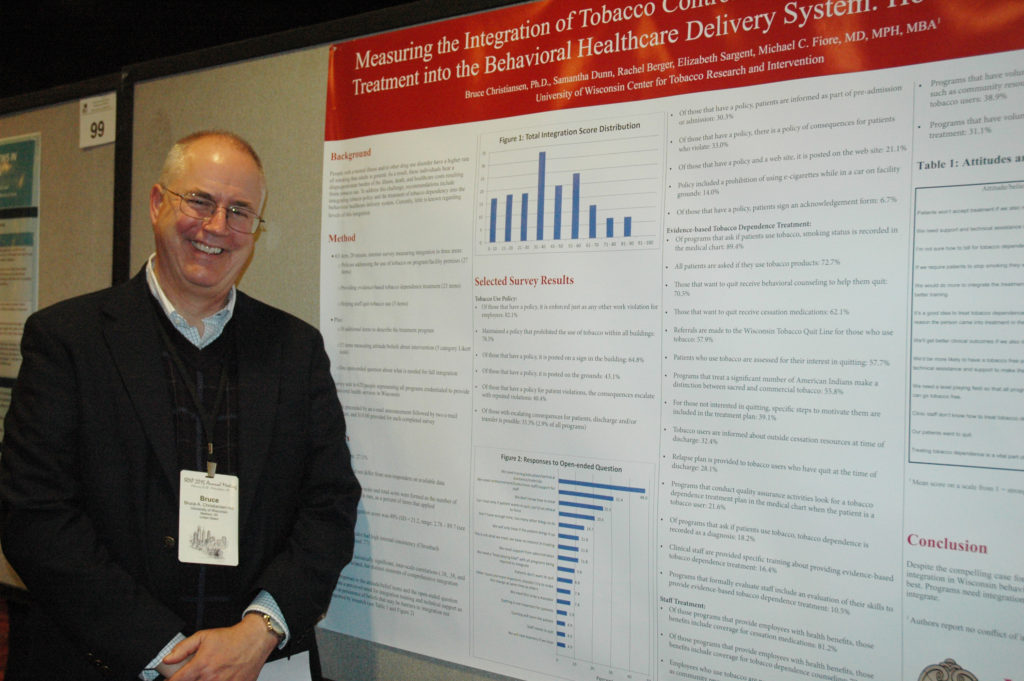 Above: UW-CTRI Researcher Dr. Bruce Christiansen presents his poster at SRNT 2015 in Philadelphia

UW-CTRI Director Dr. Michael Fiore (right) served as the discussant for symposium, “Translating Clinical Research into Practice in U.S. Health Care: New Results of NIH-Funded Trials in the Consortium of Hospitals Advancing Research on Tobacco.” Researchers found that helping inpatients quit was a challenge, but that in-person support with medications and counseling helped. Fiore discussed the opportunity to leverage policy changes from the Affordable Care Act to be sure inpatients get the help they need to quit.

Fiore also served as the discussant for a symposium, “Tobacco Cessation Interventions for Low-Income Smokers: Reaching the Forgotten Smokers.”

At the conference, UW-CTRI Communications Director Chris Hollenback explored research on technology to help patients quit, and one study led by Judith Prochaska found that a 20-person Twitter chat group outperformed a control group that received eight weeks of nicotine patch plus a referral to SmokeFree.gov. The Twitter chat group got daily discussion topics and feedback on their chat messages. Sustained abstinence about the Twitter group was 40% at 60 days versus 20% for the control group.