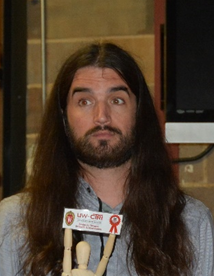 T. Jay Christensonis a health counselor in Milwaukee. T. Jay has already had a varied career—working for Miller Brewing in the brewery and as a musician. One of his former band’s songs was featured on the hit TV show, “The O.C.” His current band, Space Raft, was featured in SPIN Magazine and toured Europe.  T. Jay has degrees from UW-M in psychology and philosophy.