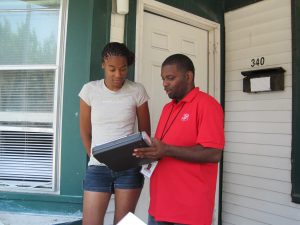 For three years, UW-CTRI partnered with the Salvation Army and St. Vincent de Paul Society on a project to help residents in Milwaukee ZIP code 53212 quit smoking. Most people in this neighborhood have low incomes and limited health care. It was made possible by a grant from the Wisconsin Partnership Program of the UW School of Medicine and Public Health.

The project included a door-to-door survey by people hired from the community. Results showed that smoking prevalence was about 40 percent—double the statewide rate. It also found that survey participants thought the smoking rate in the neighborhood was almost 80 percent.

Survey staff, recruited from the job board at the local YWCA among other sources, asked 654 adults about individual and household smoking status, as well as topics like perceptions of the safety and efficacy of quit-smoking medication, will power, menthol cigarettes, etc. To get an additional barometer on why residents misperceive smoking prevalence by twice the actual rate, this survey included questions about the smoking status of best friends and close friends—separate from the entire neighborhood. The thought was that the misperception comes from a high smoking prevalence in individuals’ family or inner circle. 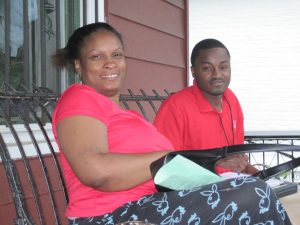 The results showed two out of three respondents reported household incomes below $15,000 and 40 percent said they smoked. What’s more, beliefs about tobacco addiction showed a stark need for education and cessation interventions, according to a paper by Bruce Christiansen, Kevin Reeder, Maureen Hill, Tim Baker published in the Journal of Studies on Alcohol and Drugs.

The majority of survey respondents believed that smoking is acceptable, at least under some circumstances. For example, 65 percent agreed that it was “OK” for people to smoke a little or some of the time. (Meanwhile, research shows even one cigarette per day can be deadly.) Most of the respondents, 83 percent, believed that “Quitting smoking is just a matter of will power.” In addition, smoking was seen as normative in this population. When asked how many people in their community smoke, the average respondent answer was 73 percent (the overall smoking rate of Wisconsin adults is 19 percent). Quitting cold turkey, on one’s own sans treatment, is successful about five percent of the time. However, 63 percent of survey respondents said cold turkey was the best way to quit.

The smokers in the sample tended to be daily smokers, but they smoked at fairly low rates, perhaps reflecting their financial constraints. Most smoked menthols. The need to reach this population with quit-tobacco treatment was illustrated by the finding that more than a third had never tried to quit.

“These findings underscore the need to address these issues in very poor smokers,” Christiansen said, “if we are to effectively engage them in evidence-based tobacco-dependence treatments and help them meaningfully reduce their risk of smoking-related disease.” 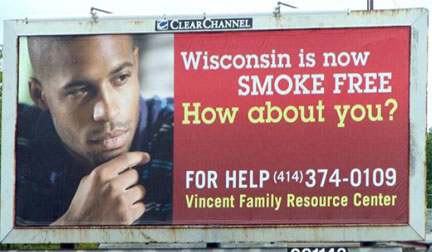 The ZIP Code Project has completed several other action steps, including a marketing campaign (left) to raise awareness of the reasons to quit tobacco and programs that help, dispel misinformation, and boost individual self-efficacy of smokers. ZIP Code staff conducted community meetings to raise awareness that included door prizes as incentives to attend (see below). 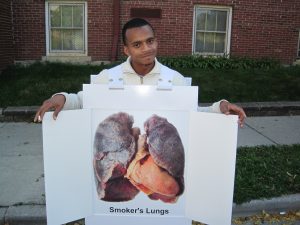 ZIP Code staff offered information on the project and how to quit smoking to area residents. It’s all part of a partnership between the Salvation Army, St. Vincent Family Resource Center and UW-CTRI to empower residents of a low-income community in Milwaukee to quit smoking and end exposure to second-hand smoke.

The ZIP Code Project sponsored a quit-smoking event that attracted more than 50 residents from a low-income part of Milwaukee. The event, held at the Heart Love Place, included a presentation from a variety of speakers on why and how to quit smoking, as well as refreshments and exciting prizes for the attendees—including a new bike (left), a digital camera, and free tickets to the movies and a Milwaukee Bucks game.

Smokers brought their children, significant others and friends to support them as they explored the different programs and treatments available to change their lives and improve their health. Cindy Williams, a now smoke-free resident of the area, told her fellow community members about her experience, providing hope and inspiration. 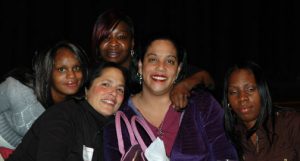 Prior to the event, researchers and project coordinators were unsure how receptive residents would be to quit-smoking treatments and programs because of the high number of smokers in the community.

“The event exceeded my expectations,” said Christiansen, a leader of the ZIP Code Project. “I was really excited to see how many people came out.” 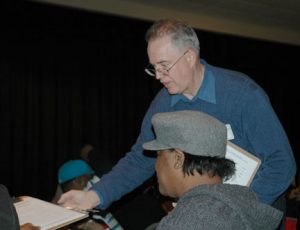 At the end of the presentation, when Christiansen (left) asked the audience who was willing to try quitting smoking in the next six months, more than half the hands in the room went up. Then Christiansen asked who was ready to quit smoking right away and 19 smokers signed up.

“I am particularly excited by the number of people who said, ‘I am ready to give it a try,’” Christiansen said.

He hopes to develop sustainable resources in the 53212 ZIP code and hold more stop-smoking informational events. Calls to the Wisconsin Tobacco Quit Line from Milwaukee County were up 24 percent the week of the event over the previous week.