Nowadays, computer code is available for free on the Internet (known as “open source”) but, when Loh started writing his computer code to help predict variables in 1990, it wasn’t that easy.

“The World Wide Web didn’t exist!” he quipped. Loh is an international expert on classification and regression tree analysis—the sophisticated computer algorithms that can be used to predict outcomes with discrete values (classification trees) or outcomes with continuous values (regression trees). Loh’s code has been used for many applications, including precision medicine.

Loh is a professor in the UW Department of Statistics who has had a long and distinguished career as a statistician. He spent the 1986-7 academic year on a junior faculty research fellowship at the IBM Watson Research Center and later consulted for government agencies and pharmaceutical companies.

In 2007, he began using his expertise to help UW-CTRI solve riddles in the psychology of tobacco dependence and its treatment at the invitation of UW-CTRI Research Director Dr. Tim Baker and UW-CTRI Director of Biostatistical Operations Dr. Stevens Smith.

“I’m just delighted when people want to use methods I develop,” Loh said. “So, when Tim and Stevens first came and said they would like me to help them, I was ecstatic. And it helps me come up with new ideas. I’ve been working on the software for almost 30 years and continue to add features to it. Many of these features I wouldn’t have thought of without interacting with people in industry and UW-CTRI folks.” Loh paused, then said with his voice lilting ever so slightly with excitement, “I realize, ‘oh, that is a problem, let me see if I can solve it!’”

Smith said the participation of Loh and Dr. Dan Bolt demonstrate how well Baker and UW-CTRI Director Dr. Michael Fiore build talented teams of expert collaborators to support UW-CTRI’s center grants. “I’ve called on Dr. Loh for support with his statistical expertise countless times, and he is incredibly responsive,” Smith said. “It has been a privilege working with Wei-Yin, who is an excellent teacher and who is so incredibly knowledgeable.”

Loh is the patriarch of an extraordinarily talented mathematics family. His son, Dr. Po-Shen Loh, a mathematician on the faculty at Carnegie Mellon University in Pittsburgh, recently found a simpler way to solve the quadratic equation that may transform the way the world understands this 4,000-year-old topic. “He told me the Prime Minister of Singapore wrote about his discovery,” Wei-Yin said with a hint of delight in his voice, referring to the tweet sent around the world by Prime Minister Lee Hsien Loong. 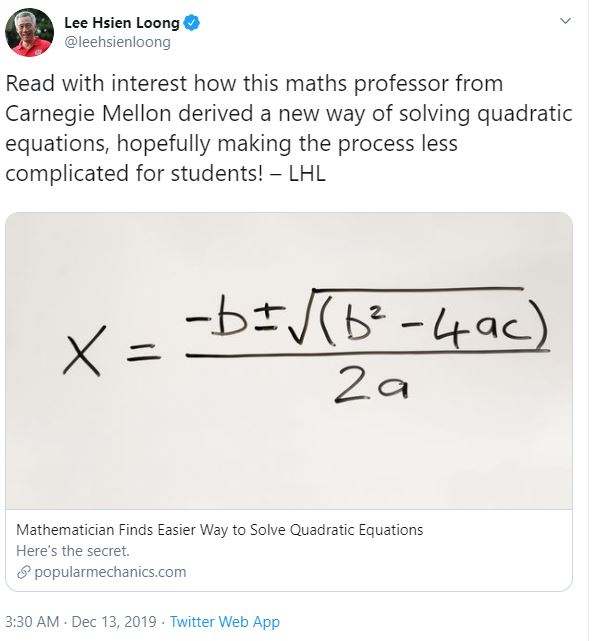 However, when Po-Shen was named the head coach of Team USA for the International Mathematical Olympiad, his dad wasn’t so excited. “At first, I was horrified,” Wei-Yin said, “because the US team had not won the Olympiad since 1996.’’ Undaunted, Po-Shen Loh took over as coach and the US team has won or tied for the world championship four of the last five years and became the first US team to repeat as world champions. Po-Shen has a company called expii.com to train people in math, and people have viewed his YouTube videos more than five million times.

Po-Shen’s brother, Dr. Po-Ru Loh, studied at MIT and is an assistant professor at Harvard Medical School. Their sister, Dr. Po-Ling Loh, is an associate professor of statistics at UW (on leave at Columbia this year).

Wei-Yin’s kids have accomplished all this, while some parents struggle to get their kids to do their homework.

Wei-Yin’s brother, Dr. Wei-Liem Loh, studied at Stanford and is on the statistics faculty at the National University at Singapore (where Wei-Yin earned his bachelor’s and master’s degrees before pursuing his PhD at Cal-Berkeley).

Wei-Yin Loh said he tried to foster his kids’ success at a young age. “You slowly introduce them to interesting problems, they solve them, and they want to do more. If they are successful, they will learn more and more by themselves.”

Loh said he has appreciated the opportunity to grow at UW-CTRI. “I learned a lot about smoking cessation and psychology. When I first joined, I didn’t know what everyone was talking about!” he quipped. “I am amazed at the level that Dan Bolt and Stevens Smith are applying statistics in areas that I don’t practice in, or haven’t heard about.”

Baker expressed his gratitude for all of Loh’s contributions, particularly in classification and regression tree analysis. “Dr. Loh is invaluable in so many ways, including his teaching in our research meetings, his serving as an expert consultant on statistical issues across multiple projects, his development of new and superior analytic approaches, and his performing key analyses that address our core research questions. In short, his contributions have made our research more sophisticated, valid, and informative. And, best of all, he is a wonderful person to work with.”

“He’s our statistical safety net,” Smith said. “He’s a great teacher and has such a positive outlook on life.”

“Not only is Dr. Loh a world-renowned expert in statistics,” said UW-CTRI Director Dr. Michael Fiore, “but he’s also such a good person. We are glad he’s here.”