In a city that displays art by the likes of Michelangelo and Leonardo da Vinci, five UW-CTRI staff members presented research findings to peers at the 2017 Society for Research on Nicotine and Tobacco (SRNT) Annual Meeting March 8-11. 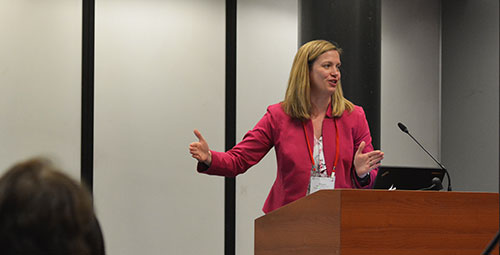 UW-CTRI Associate Research Director Dr. Megan Piper (above) served as the discussant at the symposium “Time-varying Effect Modeling to Shed New Light on the Developmental Course of Nicotine Product Use in the US.” At the Passi Perduti (Lost Steps) meeting center of the Firenze Fiera convention center, Piper discussed how the technique known as “time-varying effect modeling” (TVEM) helps researchers better understand how smokers change over time and how best to support them. Stephanie Lanza (Penn State) served as the chair, and presenters Jessica Braymiller (Penn State), Michael Russell (Penn State), and Lisa Dierker (Wesleyan University) discussed how TVEM may reveal trends, such as the ages when teens and young adults might be most vulnerable to tobacco addiction. 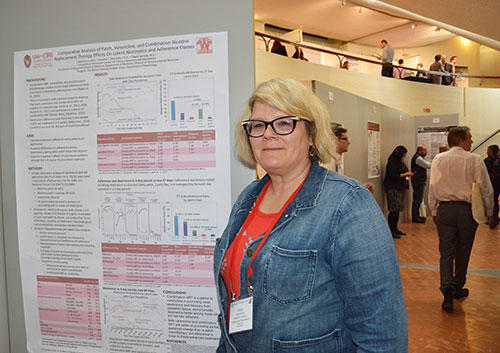 UW-CTRI Researcher Holly Prince presented her poster showing that the combination of nicotine-replacement medications (NRT) was superior to varenicline in promoting initial abstinence and recovery from cessation failure. Both varenicline and combo-NRT were better at promoting partial, sustained change than was the nicotine patch alone, but adherence to these more intensive regimens was lower. Other authors: Mark Versella (Rutgers) and UW-CTRI Associate Research Director Dr. Danielle McCarthy. 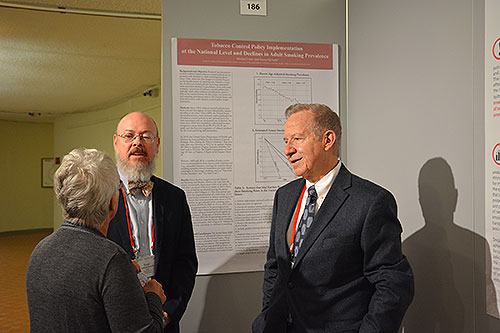 UW-CTRI Director Dr. Michael Fiore (above left) and Simon McNabb (above center) of the US Office of Smoking and Health present their poster, “The Association between Tobacco Control Policy Implementation at the National Level and Declines in Adult Smoking Prevalence,” at SRNT Italy. Since 2009, the U.S. age-adjusted prevalence of adult cigarette smoking has fallen markedly—from 20.6% in 2009 to 15.3% today. That’s a decrease of about 0.78 percentage points per year, more than double the annual rates of decline during the eight years before that (.36 percentage points per year) or from 1992-2000 (.28 percentage points per year). At the pace set during the last 8 years, adult smoking in the US would end in about 20 years. 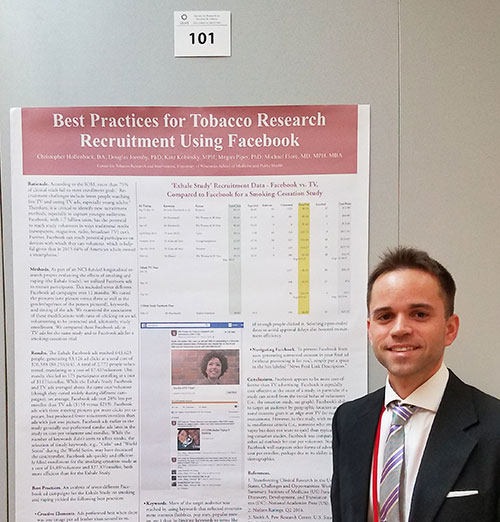 UW-CTRI Communications Director Chris Hollenback presented a poster he created with UW-CTRI Director Dr. Michael Fiore and UW-CTRI Clinical Director Dr. Doug Jorenby, “Best Practices for Tobacco Study Recruitment Using Facebook.” A steady stream of viewers came by to discuss challenges and advantages to using Facebook to recruit for research studies. UW-CTRI has found Facebook to be the most cost-effective and flexible tool with which to recruit patients.