Dr. Michael Fiore attended a meeting on the US Housing and Urban Development’s (HUD) proposed rule to make all public housing smoke-free at the White House in Washington, DC. At the meeting, a panel of HUD housing managers and residents discussed potential struggles that could occur once the rule is effective. 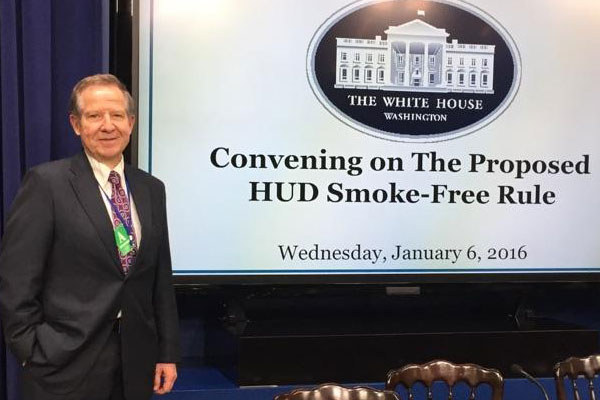 Fiore said experts in attendance agreed that having a tobacco-cessation program in place would be central to the success of the proposed rule. “It would be an incredible opportunity lost if we don’t take advantage of this chance to help low-income residents quit smoking,” Fiore said.

Through the Tips From Former Smokers™ media campaign, the federal government is already promoting the national tobacco quitline and smokefree.gov to help patients quit.

Fiore submitted public comments to HUD, commending them for the proposed rule, encouraging continued promotion of the quitline and smokefree.gov, and encouraging them to include e-cigs in the final rule. Lois Smith, a HUD resident and former smoker who quit with the help of the Wisconsin Tobacco Quit Line, also submitted comments in favor of the rule.