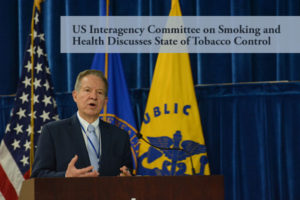 Above: Dr. Michael Fiore speaks at the US Interagency Committee on Smoking and Health meeting near the US Capitol in Washington, DC.

The Interagency Committee on Smoking and Health (ICSH) met at the Hubert H. Humphrey Building near the US Capitol in Washington, DC on May 31 to discuss the state of tobacco control and where to go from here. 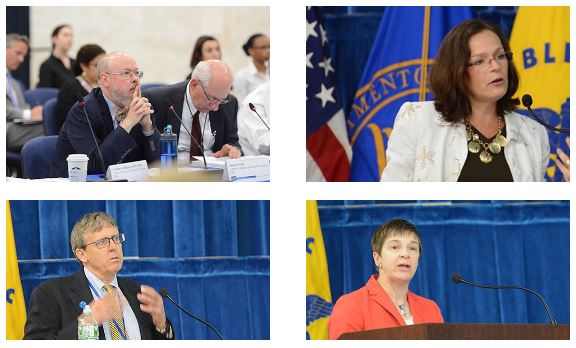 US Surgeon General Sylvia Trent-Adams is the Chair of the Committee, composed of 21 federal members and 5 public members. McNabb coordinated the meeting.

Corrinne Graffunder, Director of the US Office of Smoking and Health (OSH), spoke first about progress to help smokers quit.

“Three in five adults, more than 52 million Americans, have managed to quit for good. From 2012-2015, we estimate that millions have attempted to quit during the Tips (ad) campaign, and half a million have quit for good. While we’ve made encouraging progress, there is still clearly room for improvement. Significant disparities persist. We need to increase quit attempts.”

“If we give a smoker who is not yet ready to quit nicotine-replacement therapy, particularly the patch, and we talk to them about reducing the number of cigarettes they smoke per day, this will increase the likelihood this individual will make a quit attempt,” said UW-CTRI Director Dr. Michael Fiore during a presentation to the 50 total people in attendance.

“If you start with medication and add counseling to that, you boost success by about 70%.” He added that public policies can spur quit attempts. For every 10% increase in the price of tobacco, consumption decreases 4%.”

Next Steps
During an open discussion at the meeting, the conversation turned to next steps in tobacco control. Dr. Steve Schroeder, from the University of California-San Francisco, questioned the validity of the concept that people who quit “cold turkey” do so truly unassisted, and emphasized the importance of addressing that potential misconception.

Dr. Erik Augustson, from the National Cancer Institute (NCI), spoke about mobile health (mHealth) platforms, pointing out that the nation lacks the infrastructure and funding to match the number of smokers who would like to quit. There simply are not enough counselors to reach all smokers, he said. There are limitations to delivering tobacco cessation due to the realities of healthcare systems workflow, as well as long gaps in communication between patients and providers.

Augustson said that quitlines offer benefits such as access across the nation and proven effectiveness. But the reach is limited to 1% of smokers. Meanwhile, the landscape of communication is changing. “People don’t talk on the phone much anymore,” Augustson said. “If you know a young person, it’s difficult to get them to call you. But you can get them to text you.”

He shared a recent Pew poll showing that 95% of Americans use cell phones, 77% use smartphones, and the numbers hold true across demographics.

At NCI, Augustson runs mHealth programs such as SmokefreeTXT. Advantages include reach, lower cost, and engagement.

“I think the greatest value is their ability to enhance engagement with the intervention,” he said. “They can make it more likely the person will participate in that treatment. It removes many of the barriers to engagement. These become seamless in people’s lives. They give us the ability to be in the space where the behavior is happening.”

He mentioned a budding partnership with UW-CTRI to refer patients from electronic medical records to the TextToQuit program. Watch for more on that program at this website.

Paula Keller, former UW-CTRI staffer and now Director of Cessation Programs at ClearWay Minnesota, said that when they switched to offering a menu of cessation programs using varied delivery mechanisms, total use went up from 5,900 one year to 16,000 the next.

Keller said this system empowers smokers by providing them with choices. The most popular choices have been a two-week starter kit of nicotine patches, gum or lozenges, mailed quit guides, then email and text interventions, then their Helpline (quitline). The Helpline quit rate was 29.6% and Individual QUITPLAN Services was 25.5%.

Panelists discussed ongoing talks with some of the biggest tech companies in the world regarding potential partnerships to help smokers quit. Panelists also suggested collaborating on getting tobacco products out of pharmacies.

ICSH meetings are held twice a year in the Washington, DC area. During the last five years, topics have included: